Shri Madhukar Malhotra, Secretary Bharatiya Vidya Bhavan, Chandigarh Kendra, is a distinguished Rotarian and engineering management professional. He has diverse experience in various corporate houses in USA and India to his credit, including a stint with the Planning Commission, Government of India. He later promoted Future Innovations Pvt. Ltd. and was engaged in international trading for over 20 years. An altruist to the core, Shri Malhotra is a significant contributor to several community service initiatives in the city. He joined Rotary in 1979 and has held eminent posts such as President in 1989-90 and District Governor in 2010-11. He has been actively associated with service projects at both the club and district levels. He was also the founder member Secretary/Treasurer of Cheshire Home Chandigarh, a non-profit organization established for providing assistance to homeless physically challenged persons.Shri Malhotra is actively involved in setting new benchmarks of excellence for the school and provides invaluable support and expertise to the institution. 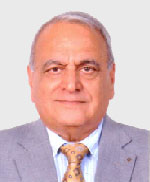